Outlines for those who hate outlining 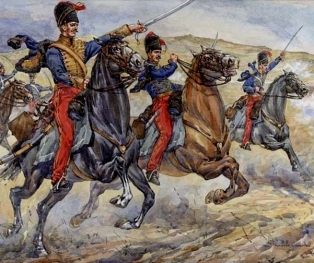 There’s one thing we always hear about outlines and writers, and we hear it over and over: writers are either “plotters” or “pantsers.” But there are some, me f’rinstance, who do both. Like many who write by the seat of their pants, I often charge into a story as if I’m in the Light Brigade. But I typically have to slow down when my regrets pile up like the bodies of Tennyson’s famed 600 in the valley of Death. (Who sez I’m not smart enough to look up classics on the interweb?)

I may have a few plot lines wandering around in search of conclusions, if not climaxes; I usually have a character or three whose role at first seemed vital but which has rapidly diminished in value; I may have had a gonzo crazy idea for a finale that I just couldn’t wait to write until I realized — oh shit! — it won’t work. So, what do I do? Scrap the whole thing and start on something else? Stick it in a drawer and pray the writing elves will execute a daring midnight rescue? Go on a bender, expressing my sorrow to anyone unlucky enough to stumble by?

Probably not. At least, not until I’ve done a little post-crisis evaluation. If the idea really and truly sucks, then a deep, dark drawer or a handy trash can would be a good place for it. On the other hand, if I’ve already spent a significant amount of time and energy on it, a better course might be to salvage some of it. I know I’m a good writer, so the content surely can’t be one hundred percent irredeemable crap. Fifty percent, maybe. <shrug> But how does one determine what can be saved and what needs to go down the ol’ flusheroo?

My method, derived from an almost countless number of misbegotten beginnings, is to go back and outline what’s already been written. Call it a reverse outline, a trail map of where characters have been and when/how events occurred.

I break these down in a simple chart, by chapter and scene, noting point of view character (because I usually employ way too many), plot element, and word count. I also add a fat column for remarks. This one comes in handy for recording random thoughts that pop into my head (kill off this moron, add something to show we’re in the 6th century AD, make Babs a short redhead to balance the tall brunette in chapter 3/scene 2, etc.). The order of the columns isn’t important unless you’ve got obsessive compulsive issues, but that’s a topic I’d rather not schlep around in just now. [Note: The screen capture above is from my current work in progress. See? Some of this stuff I don’t just make up, some of it I actually use!]

There’s no rule that says you can’t fill in one of these charts as you go, and lately that’s exactly what I’ve been doing: write a scene, add a line to the outline. Rinse and repeat. It’s a handy way to keep track of all kinds of things, not just word count or how often one particular point of view character (POVC) shows up. The remarks column can serve to record anything that might qualify for future consideration. If it matters that a character is left-handed, or is a Polish national, or was a great athlete, jot it down there. The same goes for any minute detail you might need to recall later. (What was the name of the cop’s poodle that got squished by the mafia don’s girlfriend in chapter 3?)

Like many writers I know, I get antsy dealing with the same character for too long. This causes me to create extra POVCs, and their very existence almost always generates additional plot lines. These all have to intersect or at least inter-relate somehow, somewhere. Having a chart like the one above makes it much easier to see who’s getting the most page-time, whose plot needs to be advanced next, and how much to speed up or slow down the pace of a given storyline. And, if the worst happens and I discover a character who isn’t pulling his or her own weight, the chart makes it much easier to decide if I should chop ’em out, kill ’em off, or fluff ’em up.

So, you see? There’s hope for those of us who don’t like to outline in advance. We’re okay with having little more than a dim idea of where our stories are headed. When it’s time to do an outline, we’ll be ready. Eventually.

Grateful and well-loved husband, happy grandparent, novelist, editor, and teacher. My life plate is full, and I couldn't be happier. Anything else I might add would be anticlimactic. Cheers!
View all posts by joshlangston →
This entry was posted in novel writing, Writing and tagged chop, fluff, gangster, girlfriend, kill, Light Brigade, novel, outline, pantser, plotter, POVC, Tennyson, viewpoint, Writing. Bookmark the permalink.

6 Responses to Outlines for those who hate outlining