The gate agent wears a Santa Claus hat, but offers neither a smile nor a “Ho ho ho,” as the old man approaches him at his station. A wide counter bedecked with metallic green garland separates them, and the agent avoids eye contact as he makes one computer entry after another. He pauses only to look over his shoulder at the electronic display looming above and behind him. Though only the two men stand at the counter, the younger one is too busy to chat.

The old man watches as the sign showing the arrival time of flight 373 is replaced by a one-word pronouncement:

And instantly the old man ceases to be alone.

“When will…” His voice fades, swamped by a dozen others, all younger. All louder. The agent steps out from behind his protective wall and moves toward the concourse. Though slowed and surrounded by questioners, he still moves too fast for the old man to follow. 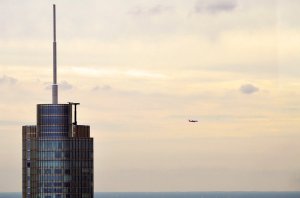 He watches the mob slowly dissipate as the agent seeks respite from the public, a comet trailing disappointment.

The rest of the crowd remains, camped in purgatory. Carry-on luggage and soon-to-be-exchanged gifts litter the walkway between crowded rows of seats. The old man shuffles by them, lost in thought. Though among them, he is not of them; he is a trespasser, not a traveler.

He glances at the glowing red digits on the wall clock, then at his watch, then back at the clock.

“May I help you?” asks a cop, summoned by a concerned passenger.

The old man shakes his head. “I told her I would be here,” he says as if that explained it all. “I have to be here.”

“Do you have a Gate Pass? Otherwise, you can’t be here unless you’re a passenger.”

He digs out the paper they gave him when he arrived.

The cop examines it and hands it back. “Ah. I see. You’re okay, then.”

The old man shrugs. Worry is not “Okay.”

“You’re sure you’re all right?”

The old man shakes his head and moves to the periphery.

Christmas music plays in the background, though largely obscured by the sounds of a busy airport–announcements, voices, the incessant beep of a golf cart used to shuttle VIPs from one gate to another. Through the windows he sees the tropical foliage of Florida beyond the runway and then is distracted by a child singing along as “Jingle Bells” pours from hidden speakers. The child knows most of the words but few of the notes.

People in the main corridor scurry by, searching for other gates and other flights. They are the world: a menagerie cloaked in noise and anonymity.

The old man ignores them as they ignore him. They look away as if they don’t see the skinny legs protruding from his running shoes or the sweat sock slipping down around one ankle. The image of the old man, his belly pushing against the waistband of his rolled-up walking shorts, is easy to catalog, easy to forget. Aged. Weak. Frail.

The neck of his T-shirt is stretched and reveals a tuft of thin curls on his chest, the same wet-newsprint grey as the few strands on his head. Centered on the shirt is a printed color photo of himself with his arm around a smiling, dark-haired woman. His face bears fewer wrinkles. A caption beneath the photo proclaims: “I’ve got everything!”

He moves on, traversing old ground.

Cautious footsteps carry him through the overheated air by a huge window and deliver him into cooler shadows where his image is reflected on the glass. His strongest feature, a fiercely patrician nose, angles down steeply above an unlit cigar. Trailing behind is the faint odor of tobacco–unsmoked–he’s been told he cannot smoke. His rheumy eyes drift neither left nor right but stay locked on the carpet as if his stare alone will part the masses all around him.

It doesn’t work. Instead, he must maneuver between them and does so in silence.

A heavy man in a flowered shirt stands in the middle of the aisle talking to a woman of similar size wearing a dress with the same floral pattern. “They never tell ‘ya nuthin’,” he says, and the old man turns away.

A child lands at his feet, dumps a mound of building blocks on the carpet, and begins to play. The old man turns again.

The flower-shirted passenger is still talking to his female counterpart. “Remember the crash they had a couple years back? Horrible. Terrible tragedy. And they never said a word about it. Sure, it was on the news, but nobody at the airport found out ’til later.” Shaking his head, the big man shifts his bags from seat to floor, then drops into the vacated space.

With his hands clenched and jaws set, the old man moves on.

“The Midwest? I’d never fly out of there,” says a woman whose jewelry and nail polish match the trim on her velour jogging suit. She talks into her cell phone, but her voice seems so loud she doesn’t need it. “Storms are so bad, they knock planes right out of the sky.”

“They should have extra planes standing by,” mutters a mother of three little ones in need of naps. The old man could use a nap, too, but that’s not possible–not yet, not until she’s safe. He drifts on through the restless crowd.

The gate agent returns and approaches him as if they know each other. “Maybe you ought to go home. It’s getting late and there’s nothing–” A phone at the desk rings. The agent answers it and holds up a hand. The old man walks away.

“Ladies and gentlemen,” the agent announces over a loudspeaker, “flight 373 has just been cleared to land. We’ll have the aircraft ready for boarding as soon as possible.”

Against a background of scattered whistles and cheers, the old man raises his head. The cigar disappears. His hands, no longer clenched motionless behind him, come forth. Like the rest of him, they become animated, suddenly alive.

The crowd pushes past him and presses toward the door. Ropes on either side of it define a canyon of bodies risen on cue. The portal is lost to him. He can’t see it; he’s too far back, but he knows where it is. After another eternity, the door swings open and bodies spill out, singly at first, then more and faster until they pour through–in plaids and hats, with garment bags, stuffed bears, holiday packages, briefcases, skinned knees, and shopping bags.

The flow seems relentless, an inexhaustible supply in never-ending variety. He waits for it to end, knowing it must, knowing he has no choice, and knowing she will be the last in line. Wheelchairs always come last.

Finally, the numbers dwindle until the door stands empty; the passageway is vacant, and the ropes become tracks across a prairie. He waits, resisting crazy, stupid, scary thoughts of flights denied and missed connections, until he sees a flight attendant pushing her chair. She, too, is anxious, though her fear passes when she sees him. Her name on his lips becomes a grin as he moves toward her, his step more sure, his stride no longer humble. Reaching her, he leans down and swaddles her in his arms.

A tiny liquid jewel sparkles from the corner of her eye.

The embrace lasts a long time, but eventually, he must stand.

She smiles. Her hair matches his now, and a wisp of it has come loose. She tucks it behind her ear and pats his hand as he steps behind the chair and nods goodbye to the flight attendant. 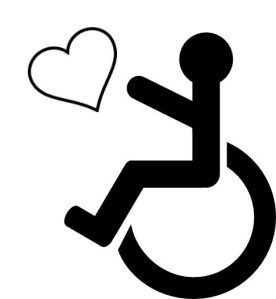 They are on their way home–together again–in time for the holidays. She leans her head back and to the side as if trying to get closer to his hand. He squares his shoulders and draws in his stomach. Now it’s much easier to read the caption on his shirt.

If you’re looking for something to share with your families this year, I’d like to suggest a couple of my books. The first is a collection of short stories that offer non-traditional but humorous views of the holidays. It’s called Chritsmas Beyond the Box. The story above is part of that collection. The second book is a novel called A Season Gone to the Dogs and features a new take on how Santa and his crew operate in this modern world. Hint: pets make it happen. Both books are entirely family-friendly and are available at Amazon.com. Click on the titles above for direct links.

Thank you, and have a Merry Christmas!

Grateful and well-loved husband, happy grandparent, novelist, editor, and teacher. My life plate is full, and I couldn't be happier. Anything else I might add would be anticlimactic. Cheers!
View all posts by joshlangston →
This entry was posted in short fiction, Writing and tagged airline, airport, anxiety, Christmas, delay, flight attendant, holiday travel, lonely, love, romance, rules, senior citizen. Bookmark the permalink.