Look hard enough, and you’re almost certain to find a brain in every writer. How big it is and/or how often it’s engaged are questions for another time.

It’s time for something somewhat <cough> headier than usual. I read an article by Carl Zimmer in the New York Times on-line edition about research done a few years ago in Germany to find out what parts of a writer’s brain contribute the most in the creative process. (Full disclosure: I’ve long believed that two things contribute the most to this: deadlines and poverty, but not always in that order. Most of us who can put off the real work of sitting down and hammering stuff out, will almost invariably do so.)

Here’s a link to the article in case you need to read it for yourself (suddenly, you don’t trust me anymore? Was it something I said? Oy.): http://www.nytimes.com/2014/06/19/science/researching-the-brain-of-writers.html?smid=fb-share&_r=1 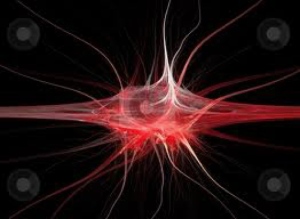 Synapse firing. Imagine a bazillion of these puppies going off in your head every time you dream up a new scene.

So, what happens upstairs when we actually do write something? What parts of our brains kick in, and why? According to the German study, prolific writers have different internal reactions than those who write less frequently. Both groups may be absolute idea machines, but those who write a lot activate those portions of the brain geared to speech. Those who don’t write a great deal activate the parts of the brain mostly given to vision.

So, surprise-surprise, writers think in words–both internally and externally–while non-writers think in pictures. It seems likely that seasoned writers, by virtue of practice and repetition, shift the creative process from images to text automatically while those who haven’t done much writing struggle to get what they’ve seen down on paper.

The difference amounts to the novice coming up with: “She was gorgeous in her sexy, green dress.” While the writer generates a description of the low-cut, emerald gown and the redheaded goddess wearing it. There’s just no way around practice, folks!

Perhaps of more interest is what happens inside the brain of a reader. Hm?

Yeah, there’s a whole lot more going on while you’re trying not to fall asleep during the PowerPoint, but I don’t want to confuse you with too much just now. Stay awake, dang it!

A quick look into established theory yields the following: Given a bullet-point list, like those we’ve all come to love in PowerPoint presentations, the brains of most readers will see action in Broca’s Area and Wernicke’s Area. This is where language gets turned into meaning. Important, certainly, but not StarWarsy cool.

What’ way cool is when that same info is converted into story form. That’s when the reader’s brain gets a jumpstart from the Motor Cortex. Think of it as the Harley-Davidson Area. It’s where the stuff that’s just been read is converted into something akin to experience. Which do you suppose is more likely to be remembered? Vroom-vroooom!

If you’re a writer, and you want to connect with your readers, you’ve gotta pump some fuel into the Harley Area. You do that with sensory stuff. Let readers know how that sexy green dress felt against the redhead’s satiny skin. What her hair smelled like. What her lips felt like. What… Whatever!

Okay, brain surgery’s over for today. Go write something.

Grateful and well-loved husband, happy grandparent, novelist, editor, and teacher. My life plate is full, and I couldn't be happier. Anything else I might add would be anticlimactic. Cheers!
View all posts by joshlangston →
This entry was posted in short fiction, Writing and tagged brain, emotion, feelings, intellect, intelligence, readers, redhead, sensory words, sexy, thinking, thought process, visceral, word pictures, Writing. Bookmark the permalink.

10 Responses to A Writer’s Brain (Encore)