I’m having trouble writing an exercise for one of my classes. The students need an example of really dreadful writing. It needs to be so bad that it borders on the horrific. We’re not talking scary here; we’re talking poorly written.

And I just can’t bring myself to do it!

I need to provide weasel words–those nasty little meaningless collections of letters that swarm around everyday speech like flies on roadkill: really, very, almost, rather, quite, simply, kind of, vast, etc. I also need to plug in a bunch of adverbs, adjectives, and clichés (nearly, utterly, seemingly, partly, large, small, heavy, etc. I’ll spare you the sample clichés).

But I’m struggling. After thirty years of avoiding these things, it’s damned difficult to intentionally use them! I’m struck by the ironic possibility that my students, for whom making these words suspect, will feel as uncomfortable writing properly as I am writing improperly!

It’s much easier to explain that by referring to a new character as a “burly cop,” a “pretty girl,” or a “handsome guy,” they’ve given their readers precious little to go on, meaning: imagine. Instead, give ’em a cop whose belt buckle hasn’t seen daylight in twenty years, an ingénue with curves like a double-scoop cone, and a guy whose face belongs on the cover of GQ. That might be enough to fire a reader’s imagination into supplying the details in their mind’s eye that’ll bring these tropes to life.

But no. Telling them isn’t enough. If it were, I wouldn’t have to keep telling them!

The time-honored maxim about showing rather than telling applies to teaching, too. Damn it. Hence my need for examples. In situ, as it were.

But where do I begin?

I tried taking an old short story and rewriting it so that it has lots and lots of bad stuff in it. My fingers and my keyboard backed away from each other on their own volition. Honest! I. Couldn’t. Do. It. 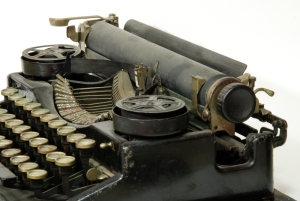 At least, not by touch-typing. (‘Twas an ancient skill once taught in public schools. It’s now called “keyboarding.” An aside: I’m told that the width of modern railroad tracks is based on the width of the chariot wheels used by Celts in the 1st century BC. Bizarre? Maybe. But is it any more bizarre than the keyboards we force our kids to use? They’re the same as the ones on typewriters from the 19th century–a design dictated by the need to separate commonly used letters so the pesky metal arms attached to the keys wouldn’t get tangled up and smear ink on the paper. You  remember paper, right?)

Fortunately, I’ve had a double Manhattan. This has had the precise calming effect needed to convert my otherwise brilliant prose into pure whale dreck–the stuff left over after the planet’s largest mammal has been rendered into its tiniest marketable bits. In Japan, most likely. Bon appétit. <cough>

So, fear not, students! Just for you, I’ve taken on the unenviable task of converting my prose from a thing of beauty to… something less. Significantly less, I hope.

Oy. What we do for the sake of progress.