Virgins are people, too! (Encore)

What? Virgins are people, too?

Of course they are! They’re also a primary category in my conglomerated approach to the characters of popular fiction: Villains, Virgins, and Vigilantes. Who could take a look at dear, sweet Nell — Dudley Do-Right’s heartthrob — and not be overcome with sympathy? (Or at least some socially responsible emotion.)

But while Nell embodies much of what we think of when imagining a damsel in distress, she hardly epitomizes all such victims or the broader sense of “innocence at risk” which is what I’m going for in my vastly oversimplified category.

What I’m really talking about are victims, and they come from all demographic groups, not just from Miss Montague’s Finishing School for Pale-skinned Girls of Lofty Repute. <wheeze>

Nope, our victims come from all over. What’s important for writers of popular fiction to remember, is that these characters need to be sympathetic. Readers need to care about them and care enough to keep turning pages to find out what happens to them.

A toddler steadying himself with the aid of a kitchen stool isn’t nearly as sympathetic as one reaching for a pan of boiling water on the stove. Readers automatically fill in the blanks for such a thin description. They’ve seen toddlers, and they’ve seen boiling water; they can imagine the rest.

With adult characters, the writer has to do considerably more work. If Wall Street scion, Cranston J. Flossweight reached for the pan of boiling water, most readers wouldn’t care if he dumped it on himself. In fact, most would probably prefer that he did. But what if the writer needs Cranston to be sympathetic? What can she do to make it so?

For starters, either change his name or show that he’s carried the moniker like Jacob Marley’s chain collection. It’s weighed him down and cast him as a rich wastrel, when in fact, he’s a really decent fellow who’s made giving to charity his life’s work. Show that the reason he puts in so many, many hours at his brokerage house — Finagle, Flossweight, and Phlegm — is that he truly wants to make the world a better place for everyone. Or, just in case his ambitions aren’t quite that noble, have someone make fun of him for something he can’t control: a peculiar walk, the way he laughs, or a bald spot that’s off-center but rings a birthmark. How charming would that be? (I’m pretty sure God invented mean girls so writers could have sympathetic school kids–despite zits, anxiety, and the never-to-be-forgotten fear of being labeled “different.” <sharp intake of breath> )

It really doesn’t take too much effort to crowd readers into your character’s corner, but it’s labor that will pay wonderful dividends. Can’t you just imagine your readers cringing in fear, praying that you don’t do anything really nasty and loathsome to your beloved virgin? “Say it ain’t so!”

But of course it’s so!

That’s what it’s all about. If we were able to be mean to our villains, imagine the truly rotten things we can do to our victims. Bwahaha! What’s a little bit of harmless evil between friends?

It’s not all sadistic pleasure, however. I can still remember the first time I had to kill off a good guy. It came in the second book of a trilogy, and the player in question was the uncompromisingly decent sort of person anyone would want for a friend. Wise, worldly, clever, patient — basically all the attributes most of us would like to think we have without any of the other stuff that makes us merely human. So, of course, this character had to go. He’d served his time, made his friends, and angered his enemies. Ergo, he was doomed.

Just dispatching the poor schlep might have been enough, but since we had to do away with him anyway (the book was a collaborative effort), we decided to make his demise the focal point of nastiness for another character, an arch-villain. If you think reading it was tough, try writing it. Somehow, we did.

Boy did that work! When my son-in-law read it, he called me — across three time zones no less — and told me we were no longer on speaking terms. (“I’m calling to tell you we’re no longer talking.” Huh? I never said it made sense.) Anyway, he felt we had betrayed him by killing off a beloved character.

But notice that he didn’t stop reading the book. In fact, he dug in even harder suspecting that we wouldn’t let the meanie get away with his crime. Nor did we disappoint him in that regard. We found a particularly gruesome way to dispatch the villain, thus restoring my relationship with my daughter’s other half. Eventually. More or less. Kinda. Whatever.

Please understand, killing that particular virgin was emotionally wrenching for the writers as well as the readers, possibly even more so, since we had the means to avoid it and opted not to. We both really loved that guy, and terminating him was difficult. Extremely so.

Why? Because we’d spent a significant part of two long volumes making him sympathetic.

From time to time we run across an individual victim who isn’t sympathetic. In such cases, it’s usually hard to apply the word “victim,” since the player involved has character traits that make one root for the bad guy. Some of these characters simply deserve what they get. They tend not to be memorable, though they may provide comic relief. (Jar Jar Binks, a particularly annoying alien who first appears in the fourth “Star Wars”® movie, was so universally loathed that many viewers adopted the slogan “Jar Jar Binks must die!” Technically speaking, Binks was a VIP — Very Important Pal — rather than a victim, but most viewers wanted him to become a victim. Much more on VIPs later.)

Scope and perspective play an important role in the discussion of victims. Joseph Stalin said, “One death is a tragedy. A million deaths is a statistic.” This sort of callous disregard for life has, to the everlasting shame of our species, been repeated over and over. But it didn’t begin with Hitler’s death camps, Russia’s gulags, or China’s peasant massacres.

In researching early European history for the Druids trilogy, we studied Caesar’s chronicles of the Gallic Wars (Commentarii de Bello Gallico). These surprising documents detail what Julius Caesar did to enhance his political standing in Rome. They also served as a sort of travelogue for the majority of Romans who never ventured far from their birthplace. 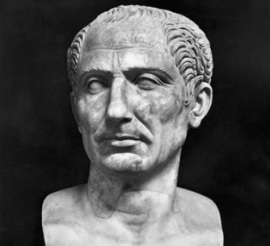 Caesar encountered scores and scores of Celtic tribes and annihilated many of them. To him, his enemies were all the same. Age, sex and infirmity were irrelevant when it came to “defeating” these people, usually for the sin of objecting to Caesar stealing their property. He killed them by the thousands and was acclaimed a great warrior for it in Rome. The Celts, no doubt, had other titles for him in mind.

We have similar grim smudges in the history books of America. One need look no farther than the infamous 1838 “Trail of Tears” which saw 13,000 native Cherokees rounded up and crammed into concentration camps prior to their forced march to Oklahoma. Fully a third of them died en route.

From the comfort of our 21st-century recliners, it’s easy to find fault and shake fingers at those involved. A careful writer, however, will look deeper and find the individual stories that flavor the whole. Some of those same Cherokees forced to leave their homes had sided with the British in 1776 and 1812. Some of the men who forced them to make that dreadful journey found their task utterly shameful and went to their graves regretting their parts in it.

A writer willing to do the extra work will take a deeper look at a tragedy, for there are many more stories, and many more interesting stories, to be told than those which float on the surface.

Next up: A closer look at some popular victims.