Forgive me if I’m excited about my new book. It’s been a while since I released some brand new, full-length fiction, and this tale is about as new as it gets.

So, where did the new book come from? What inspired something with such a bizarre title? A little background information is in order.

Remember Pandora? No, not the online music provider, or the jewelry company, I’m talking about the hapless gal who supposedly had access to a box containing nothing but nastiness. We all know what happened–she opened the darned thing and let all of that bad stuff out! Few of us, however, know that one item remained in the box: Hope. That would be Elpis [Ehl-peez] in really old Greek. Do yourself a favor and remember the word “hope.” I’ll get back to it in a little while.

Here’s something else few people know: this whole blame-the-girl thing evolved long after poor Pandora left the ancient Olympian stage. It turns out she was married to a fellow named Epimetheus [Ehp’-eh-myth-oos], and he was the one who released all that nastiness into the world. My guess is folks went on blaming Pandora because her name was easier to pronounce.

Ah, but there’s more! Epimetheus just happened to be the brother of a truly famous dude. His name was Prometheus. You remember him, I’m sure. He stole fire from the gods and shared it with mankind. What you might not have known was that, according to legend, Prometheus created mankind from clay. Evidently, whipping up a batch of people was fine with the denizens of Olympus, but sharing fire with us? That was a major no-no. It allowed us to make progress and invent civilization. And who needs a legion of gods when they have civilization?

Ol’ Zeus got so upset that he sentenced Prometheus to eternal torment. The poor schlep was chained to a rock where an eagle ate his liver–every day! The liver would grow back overnight so Prometheus could go through it again and again. (I promise; for once, I’m’ not making this up.) Oh yes, Olympians. Charming folk.

Just between you and me, I couldn’t help but wonder, why the liver? Why not something more… I dunno. Accessible? You know, like an eyeball or an ear. Hey! Stop giggling!

Anyway, fortunately for Prometheus, a fellow named Heracles [Hee’-rah-kleez] dropped by and cut him loose. You might remember Heracles by a different name, made popular by actor/bodybuilder Steve Reeves back in the late 1950s: Hercules. (Every guy I knew wanted to look like Steve Reeves!)

At this point, I’m forced to deviate slightly from the narrative to remind folks that Prometheus was a Titan, one of the rulers of the universe before Zeus & Company arrived. Why he needed help from Hercules puzzles me, since he was actually bigger and beefier than his rescuer. Another of his brothers, by the way, was a fellow named Atlas. Yep, the same one who carries Earth on his shoulders.

Anyway, before Prometheus had his falling out with Zeus, he actually helped him overthrow the old Titan regime and take over. Can you imagine how angry he must have been when Zeus had him chained to a rock? Yikes!

Prometheus later became an even more powerful figure who represented human striving, particularly the quest for, and acquisition of, scientific knowledge. So, Prometheus was not only big and immortal, he was incredibly smart.

Now, remember his sister-in-law, Pandora? The gal falsely accused of releasing all things evil in the world? Imagine her teaming up with beefy, brainy Prometheus in order to get revenge on Zeus and his hench-gods. Science and revenge–what tremendously powerful stuff! (Nearly as powerful as my secret weapon: bourbon and Wikipedia.) Anyway, that’s what’s at the still-beating heart of–wait for it–Zeus’s Cookbook!

What? I can see you wondering how all this ties in. Just bear with me a bit longer.

In the sixth century BC, the Greek poet Theognis [Thee-og’-neez] of Megara [Meh’-gar-ah] announced to the world the end of the Olympians because they were no longer revered. They were done. Kaput. And that, my friends, is when I believe Pandora achieved her fondest hope. Remember the Greek word Elpis? Hope! ‘Twas finally at hand.

Picture the smile on the face of dear, sweet Pandora as she charmed her brother-in-law, Prometheus, into using his vast knowledge of science and alchemy to reduce the entire 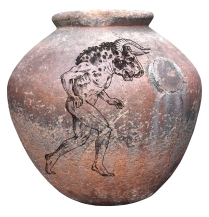 Greek pantheon, and all their revolting pets, to powder. She then stored their remains in little jars, like the one pictured here (and on the front of my book).

Oh, and just so you know, in the original Greek tale, Pandora was given an urn, rather than a box, which contained all the bad stuff. A box? Seriously? Sheesh.

So now you’re wondering what happened to all the little spice jars filled with powdered gods and goddesses, right? As you might have guessed, Zeus’s Cookbook begins to answer that question.

It all begins in suburban Atlanta, Georgia, where….

But you’ll just have to read the book to find out more. If you hurry, you can download a free copy right here. Please note: this offer is only good on August 26 and 27, 2019.

And, if you decide to grab a copy, please be kind enough to post a review. I’d really like to write more books about this stuff, but I’ll only do so if I think folks want to read it.