There’s no way around it; if you want people to read what you’ve written, you have to promote it. You’ll also have to promote yourself. You and your product are inextricably linked. Forever.

That’s just the way it is. But self-promotion, for most people, is a damned difficult thing to do. It’s even harder for writers. We’re used to being sequestered, hidden away in our cozy little garrets where we can dream dreams of varying sizes and pretend to know everything there is to know about whatever it is we’ve chosen to write about. Sheer bliss.

And, probably, sheer bullshit for most of us. The truth is we write despite obstacles and distractions, major and minor crises and somehow manage to generate something we hope people will want to read. For most writers, the work stops there. We hope people will read our stuff. We might even send out an email or two announcing the fact we finished the project that’s consumed us for-frickin’-ever. Don’t believe me? Ask a writer’s spouse.

The thing is, if the story was worth telling, it’s worth telling people they should read it, pony up a few drachmae, and find out what all the fuss was about. And, at least in the case of my own books, have a good time.

Why is that so damned hard for most writers to do? It doesn’t matter if we produce our books independently or have an agent and a publisher pushing us. Unless you’re a noted politician, a sports star, or a celebrity ax murderer, you’re the one who’s going to have to do most, if not all, of the marketing. Get used to the idea. Suck it up, buttercup.

So, in the spirit of practicing what I preach, here’s what I’ve done to enhance the sales of my work. In addition to this humble blog, I’ve taught classes on writing and publishing. I’ve done some public speaking. I’ve even done some advertising. Alas, the great, flaming tour bus of fame has yet to park in front of my house and bid me enter. There are, it seems, a <cough> few writers somewhat better known than yours truly.

But I’m not quite ready to rest on my laurels, or my hardies. (I readily forgive my younger readers for not understanding this. It’s old guy speak.) Nope, I’ve decided to try my hand at a promotional campaign. It will officially launch on August 25 and run for five days. 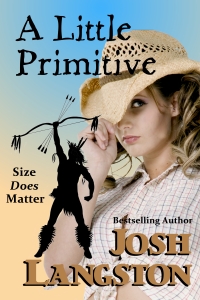 During that time, somewhere between 25 and 35 web entities will be flogging their readers, followers, and twitterees about the temporary availability of a free copy of my book, A Little Primitive. Though only available on Amazon, it can be downloaded and read on either a Kindle device or a computer. I don’t know the extent of my audience for this onslaught of ads, but there’s a chance I could reach upwards of a half million potential readers. I’d like to think I can convince 1 percent of them to take a chance. It’s a FREE book, for cryin’ out loud! What do they have to lose?

With any luck, I’ll hit my target goal of 5,000 downloads. Sadly, I won’t make a nickel in book royalties, but I’m okay with that. My diabolical plan is based on the hope that enough people will actually read the book, that when it comes time for Amazon to reward me for Kindle Pages Read (at just a hair under a half penny per word), I’ll make up the considerable investment I’ve made in the ads. Then too, there’s the hope that readers will be so intrigued by the characters in this book, they’ll eagerly cough up real cash in order to buy the two sequels.

I’ll report back in a couple weeks with the results. Wish me luck!

Grateful and well-loved husband, happy grandparent, novelist, editor, and teacher. My life plate is full, and I couldn't be happier. Anything else I might add would be anticlimactic. Cheers!
View all posts by joshlangston →
This entry was posted in marketing and tagged advertising, Amazon, blog posts, fame, fortune, free book, freebies, Kindle, page reads, promo, Promotion, sales, self-promotion, Twitter. Bookmark the permalink.