Every writer I know has come up with a story idea at one time or another which they like, but which just doesn’t seem strong enough to warrant the effort needed to write it. Still, chucking the idea into the pooper isn’t an option; after all, there’s gotta be something really good in there, somewhere. How do you dig it out?

Before you flush it away, give some thought to changing the tale’s wardrobe.

Consider how the Romeo and Juliet story looked when set in contemporary New York City. They called it “West Side Story” in case you forgot. Now, your story idea may not quite compare favorably against the Bard’s, but you ought to at least see if there’s some potential for changing the genre.

Let’s say you’re itching to write a love triangle story, but the traditional romance venues are already full to bursting with similar stuff. How would it look if cloaked in Wild West garb? Or maybe it becomes a sub-plot in a space opera. “Star Wars,” anyone?

Toss in a spy, a secret code, or a missing atomic weapon, and your love triangle morphs into a mystery thriller, a spy novel, or a pre-apocalyptic page turner.

It’s hardly a new approach, as one can see from these examples. So why wouldn’t you give it a try?

Imagine your theme is a coming of age tale. Could it be made more compelling if set during the Revolutionary War? Or maybe the age of Roman conquest, or how ’bout the Crusades?

Maybe you’re writing a story about the love of a girl for her horse. You could push that idea back into the realm of prehistory and discover you have a blockbuster on your hands. But if cave girls aren’t your thing, consider a science fiction yarn wherein your young hero or heroine teams up with a creature of alien origin. Oh, wait–I think that was “E.T.”

But just because someone has already wandered onto your intellectual turf doesn’t mean you can’t continue to play there. We haven’t run out of science fiction, western, or romance stories. People still love ‘em! There’s a good chance they’ll love yours, too. But only if you stick with it and actually finish the story.

Maybe you just need to dress one of your players in a suit of armor. So what? Maybe your tale of mistaken identity involves a fairy princess instead of a medieval scullery wench, a Viking shield maiden, or an Amazonian warrior queen.

Ideas are fragile things, but they can also be extraordinarily malleable. Don’t give up on a good one just because it doesn’t arrive fully equipped with bells and whistles. It’s your job to dress it up and add those. You might amaze yourself with what you discover. 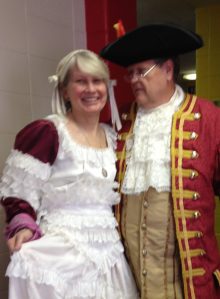 And, if you’re still struggling, Consider taking a field trip to your nearest costume shop. There you’re likely to discover worlds you never knew existed. Maybe one of them will breathe some exotic life into your idea.

And while you’re there, why not try on something to see how it looks on YOU? I’ve done it. I even talked my bride into going with me. We pushed the clock back a couple centuries in nothin’ flat.

Now, quit foolin’ around and get back to that story of yours. I’m dying to hear how it comes out.

–Josh (Many thanks to my wonderful sister, Karen Boyce, for suggesting this topic. If only she could hang around more often!)

8 Responses to Change Your Story’s Clothing