An Exercise in Square Peg Cramming

We just returned from a wonderful trip to and through Alaska. Just thinking about all the postcard-perfect scenes we saw leaves me in absolute awe. I suppose I knew, somewhere deep inside, that such vistas existed. I’d just never seen them, or anything quite like them. The only thing that comes close would be some of the scenes shot in New Zealand for the film versions of “The Hobbit” and the “Lord of the Rings.” And yet, I never got over the sneaking suspicion that much of what I saw in those films was the product of Hollywood CGI.

Alaska doesn’t come compliments of computer-generated graphics. Alaska has no need of them. Alaska, I’m thinking, has damned little need of anything–it’s already got everything, with the possible exception of sunny, sandy beaches. BUT, there’s a whole lot of Alaska I haven’t seen yet, so I could be wrong. 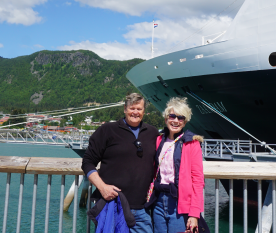 Me and the love of my life–about to embark on a perilous journey to the face of a glacier. Sans booze!

When not shaking my head in wonder at the splendor all around me, I spent a good deal of time trying to figure out how to move the novel I’m working on from its fictional Midwestern setting to this magnificent place. My original plan called for a story set in the early 1970s, and it required at least a mid-sized city, one large enough to sport a syndicated writer. Anchorage, Alaska’s largest city, had a population of about 125,000 back then, which might have worked if the story’s other requirements were met.

Then, a writer friend suggested I push the story back farther in time to take advantage of some cultural and historical issues which could play into it. So, now I’m thinking 1930s or 1940s, but Anchorage only hosted around 3,000 souls back then, hardly large enough for a daily paper let alone one that could boast a syndicated columnist. Not impossible, but pretty darned unlikely, and my story concept had enough hard-to-believe elements in it already.

But, damn it, I wanted bears and caribou; I needed the wolves, beavers, eagles, and salmon. I craved the chance to write about moose and dogsleds, the native people, and the frontier types who joined them. I desperately craved the fabulous spaces, the magical winter skies, and the skewed sense of time from the oddball schedule for dawns and dusks.

Alas, the story just didn’t bloody fit. I could knock the corners off of it, perhaps, and/or stretch this and that to make up for something else, but in the end it just wouldn’t work. Square plot, round setting hole.

Knowing that I’d stepped into a no-deposit, no-return kinda vacuum didn’t make me feel any better. I still wanted to pen something set in Alaska. (The possibility that I might write off the cost of the trip as “research” never entered my mind; I swear!)

What this means, of course, it that I’ll have to come up with something new to insert into the Alaskan wilderness. There’s more than an outside chance such a story might feature a Native American of small stature–I’m thinking of a little fellow who stands about two feet tall. How the hell I’ll get him to Alaska is a whole ‘nuther question, but one that provides me with an interesting challenge. (I’m completely open to potential story names, by the way. Feel free to drop me a line with your suggestions.)

If there’s a moral to this story, it’s that sometimes you can’t force a story to work out. Sometimes you have to take what you’re given and do the best you can with it. As much as I like the idea of setting a tale in the Alaskan wilderness, there’s no point in trying to force a regency romance into it. I’m thinking of Cinderella’s step-sisters trying to cram their hideous feet into sweet Cindy’s little glass slippers. As an exercise in imagination, it’s not a bad idea. As a practical matter, it’s a complete waste of time. As an excuse to visit Alaska? [Huge grin] Why the hell not?

4 Responses to An Exercise in Square Peg Cramming