My writing partner’s view on our collaboration

There’s a reason we didn’t argue much….

I asked my former writing partner, Barbara Galler-Smith, to read and comment on my recent tirade about collaborations. I couldn’t think of anyone more uniquely qualified to add her two cents worth. She was not only kind enough to respond, she blew me away with it. I’m damned lucky to count her as a close friend, and I urge my readers to absorb her advice and counsel; it will serve you well. Here’s what Barb (aka: Barbara and BJ) had to say:

Painting is not my department.

Actually it used to be.  Imagine trying to paint a kitchen with a talented painter. Imagine that kitchen.  Now ask that painter what kind of kitchen is it, because you know it’s important to know whether it’s Grannie’s Bake shop with a wood burning stove, a brass and glass with all the modern big city conveniences, or the kind of galley kitchen you had when you first moved away from home and didn’t know there was any way you could fill up all that storage space in the pressed wood panel cupboards.

And that painter says it’s a kitchen… stove, fridge, sink. Kitchen. And for that painter it’s enough because after all, it’s not about the accoutrements; it’s about the painting. But, you say, the tile on the splash board is orange and brown (yes, 1960s), and he wants to

paint the wall pink with mauve trim (yes, the 90s and my real kitchen). And somewhere along the line you begin to trust the painter knows how to paint, and he knows you know about colors, and pretty soon he’s slapping on the paint, and you’re changing the paint pot and when he objects, you just argue.

Then something really cool happens.  The painter develops a better eye for color, and you get a better hand at painting.  And violá! You have a fantastic kitchen exactly the way you both like it.

It’s hard work. But with the right collaborator it’s also a joy.  It’s being a parent.  You birth something in pain and suffering, with love and joy, and feel thrilled and impatient and vindicated, and hurt, and exhilarated and competent, and free, and talented and over your head. And when you’re done, it’s not perfect–what child is–but you love it.

And it was worth it.

I think writing a book is the hardest thing anyone could ever do.  For every hundred who have a book in them, fewer than ten will sit down and start to write it.  And of those ten, probably only one or two will actually finish it.

I agree with Josh that collaborations are harder still.

They take more patience and tolerance, and require more swallowing of all those things born out of fatigue or frustration for the greater good–the work in progress.  And trust. Without that trust that you can work through every disagreement, from the minuscule to the huge, you will fail. Josh once complimented me on a scene I wrote. I recall he said it was moving and brilliant.  Before the smile could form a home on my face, he also told me the scene had to go–the critical element (a character’s death) happened far too soon in the story, and the way he died wouldn’t work.  Josh made his point well. Sure I argued some, but he was right and with barely a second thought, we dropped it. I was right when I argued the reader can’t wait 18 chapters to get back to Rhonwen in the middle of book two–we needed to write what she’d been up to! He agreed. Trust works both ways.

And to get back to the painting analogy, you really do need complimentary styles. They can be very similar or they can be sufficiently different that you fill in where the other may miss. It’s not a contest–it’s a creation greater than the two writers separately. You let go of your writer-ego, and then you create something only the two of you could make together. The voice of the author is a new, third unique voice.

Writing four novels with Josh were the hardest and most satisfying work I’d ever done, and most of my memories are sweetened with the good stories. He knows what he’s talking about.  I still don’t agree with everything he says, but then that’s what makes novels so fun — there’s something out there for everyone.

And did I forget to mention outlines are essential?  But that’s another whole blog.

By the way, Josh is a pill (unlike me), but he’s one talented pill.  And I wouldn’t have had it any other way. 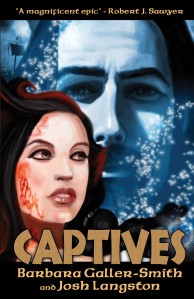 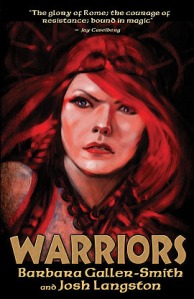 The Druids Saga: Druids, Captives, and Warriors, a historical adventure with a fantasy element, and Under Saint Owain’s Rock, a contemporary romantic comedy.

Grateful and well-loved husband, happy grandparent, novelist, editor, and teacher. My life plate is full, and I couldn't be happier. Anything else I might add would be anticlimactic. Cheers!
View all posts by joshlangston →
This entry was posted in Writing and tagged arguing, collaboration, Druids, editing, ego, experience, novel writing, outline, painting, partner, patience, talent, Writing. Bookmark the permalink.

4 Responses to My writing partner’s view on our collaboration