I can’t believe I agreed to write a memoir…

I’ve heard this said often enough, along with similar sentiments: “This is crazy; I can’t write my life story.” Or: “I can’t even keep up with FaceBook, and you expect me to write a memoir?” Or: “There’s no way I can do it. It’s too hard. It’ll take too long, and besides, no one will want to read it.”

What complete nonsense. The old adage, “Can’t never could” applies here like nowhere else. Because 999 times out of a thousand, you’re the ONLY one who can do it. Seriously! Who’s better qualified to tell your story, or any part of it? So quit saying “can’t.” You’re just wasting time that would be better spent making notes, collecting photos, working on an outline, or consulting with loved ones about odds and ends that, at first blush anyway, might be a wee bit hazy.

Other folks who quit before they’ve started do so because they believe, or have been led to believe, that their writing is substandard — too flawed to be readable. “I’m not Ernest Hemingway!” Gosh, no kidding? Well then, by all means, give up!

“Me write? I hated writing in school.”

“I don’t even do postcards anymore.”

Of all the many excuses I’ve heard, the one I find the most disappointing — by far — is: “I’m just too old.” Now we’re seriously talking nonsense. And to illustrate the point, consider that Harry Bernstein published his first book when he was 96. He wrote three more, the last of which was published shortly after his death at age 101.

While Bernstein’s story is certainly inspirational, consider also that of James Henry who couldn’t even read until he taught himself how at 92. He then wrote and published a book at 96. According to an article in the UK’s Daily Mail, “After hearing about George Dawson, a son of slaves who learned to read at age 98 and went on to write a book of his own, entitled ‘Life Is So Good’ at age 101, Mr. Henry took up reading.” The retired, 98-year-old lobsterman said, “If he can do it, I’m gonna try.” 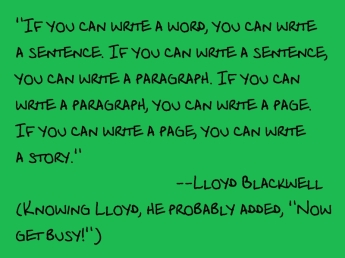 Lloyd Blackwell is a friend of mine who has been helping folks write their life stories for years. He’s taught hundreds of people since he retired, and he’s still at it. One of his favorite sayings is posted here for anyone who wants to print it out and glue it to their computer screen, notepad, or refrigerator — or any other spot where they’ll be able to see it often. It may seem a bit simplistic, but it’s true.

Thomas Edison is often quoted as saying “Genius is 1% inspiration and 99% perspiration.” I won’t address the genius part, but I know the perspiration part is meaningful when applied to memoir. It’s work, damned hard work at times. But when it’s finished, it will be one of the most rewarding things you’ll ever do.

Imagine being 92 years old and unable to read the Sunday funnies, like James Henry. And just like that he decided to give reading a try. Imagine that!

Grateful and well-loved husband, happy grandparent, novelist, editor, and teacher. My life plate is full, and I couldn't be happier. Anything else I might add would be anticlimactic. Cheers!
View all posts by joshlangston →
This entry was posted in Memoir, Writing and tagged can't, dance, excuses, fear, I can't, illiterate, memoir, paralympic, too old, Writing. Bookmark the permalink.