Are all superheroes really vigilantes? 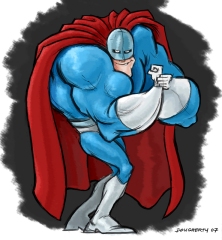 At least in the context of my Villains, Virgins and Vigilantes thesis which holds that these three character types are the primary staples of popular fiction. There are two other categories I’ll also discuss — VIPs and Vegetables — but they’re far less important, for reasons that will become apparent soon enough.

For now we get to talk about vigilantes!

According to the American Heritage Dictionary (which publication I heartily endorse), a vigilante is: “a person who is not a member of law enforcement but who pursues and punishes persons suspected of lawbreaking.” I prefer a more broad interpretation for our purposes; I’d expand the definition to read: “Anyone who endeavors to right wrongs, with or without official government sanction.”

Care to explain your recent activities to these gentlemen?

In most “official” contexts, vigilantes are frowned upon. They’re considered extra-legal, and most folks would equate vigilantism with an attack on the rights and/or freedoms of individuals. But we’re talking about fiction, and in the broader context I proffer, anyone who fights back is a vigilante.

Consider the real heart of popular fiction: conflict. Without it, there’s no story, and without characters, there’s no conflict. A tree falls in the forest, and no one cares; whether or not it makes a sound is immaterial. Put a person near that tree, and instantly there’s a potential for conflict.

In the Villains, Virgins and Vigilante schema, conflict occurs when bad things happen, usually because the villains and vigilantes are reacting to whatever might occur, or which has already happened, to the virgins, er… victims. Think of them as a three-legged stool on which a story rests. It’s the very definition of stability! The oft-sited protagonist vs. antagonist arrangement completely ignores a class of characters to which most of the negative stuff occurs. How is that fair? Or reasonable? And with only two legs on which to stand, it’s inherently unstable.

And before I get too far off topic, I’ll rein myself in.

The role of the vigilante is critical, as any reader of superhero comic books can attest. But for some reason, new writers will often overlook this simple type and serve up a bunch of characters who don’t really do much.

They’re often parked in a potentially interesting setting or given a hypothetically intriguing problem, and then they’re left to fend for themselves, or else God steps in and fixes things. Neither resolution will likely find a home in print. (The first is sometimes referred to as a HAITE script — Here’s An Idea The End. The second is a deus ex machina.)

So, if your story isn’t working, take a step back and figure out which of your players is a villain, which is a victim, and which is a vigilante. I’m willing to guess that if the majority of your players don’t fit any of these categories, your story is suffering from a terminal lack of conflict. Worse still, there’s a good chance all your characters may be vegetables. They don’t do anything, they just sit there. They may be colorful, even zesty, but they aren’t engaged in a solution. They can’t cook themselves.

Vigilantes can be most anyone, from a bumbling comedic clown like John Belushi in “Animal House,” to Jean Valjean, the long-suffering parolee who dedicates his life to doing the right thing in “Les Misérables.” 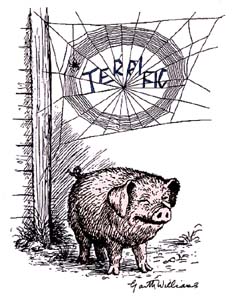 Surely, somewhere between those extremes you can find a character type willing to do something to kick start your balky plot.

It occurs to me that digging up examples of the kind of character represented by the vigilante trope is just too easy. Any hero or heroine qualifies. Anyone, in fact, who tries to “do the right thing” (emphasis on do), whether or not they succeed, also qualifies.

There is a special sub-group that deserves mention: Very Important Pals or VIPs. More often than not, these characters can be lumped into the vigilante category. Virtually all sidekicks qualify, including BatKid, Tonto, Dr. Watson, and Lassie, although one could reasonably argue that Timmy, Lassie’s supposed “master,” would more accurately wear the label.

Why single out this group? Because many of them don’t always act like vigilantes. Quite often their role is more observer than player, and yet they still get involved in the action from time to time. There’s also a subset of anthropomorphic things. These include talking animals and robots, of course, but also self-aware cars and spacecraft. For those familiar with children’s fiction, sentient trains, skateboards and backpacks won’t come as a surprise. Such critters are closer to VIP status than they are to being vigilantes.

Speaking of Kid Lit, I believe too many of these things have replaced human characters who make decisions and take stands. Gadgets have supplanted trial and error; button-pushing has replaced risk-taking. Oy. Kids these days!

Just because your character is playing in the superhero’s favorite role, you needn’t make your vigilante super. Give him or her some foibles and a serious weakness or two. It doesn’t have to be kryptonite, but if you make it understandable, your character’s vulnerabilities will translate into strengths, at least from a reader’s standpoint.

A couple examples come readily to mind. The first was a TV show from the early 1980’s called “The Greatest American Hero” and featured a milquetoasty school teacher named Ralph who’s given a spandex costume that grants the wearer super powers. Unfortunately for Ralph, the suit didn’t come with a manual, and the poor schlep spends much of the series crash landing before, during and after his adventures. Yes, it was funny, but his vulnerability also endeared him to viewers.

In another TV drama, “The Closer,” Deputy Chief Brenda Johnson is a whiz at solving cases and extracting confessions, but she’s also a closet junk food junkie who keeps a drawer full of candy and cup cakes handy for whenever she’s on edge, which is pretty much all the time. Viewers loved it because they could identify with her. Your vigilante could do much worse. In fact, I recall at least two such characters who had a deep and abiding love of soap operas. This stuff matters, folks.

The last area I want to touch on in regard to vigilantes concerns dogs. More than any other non-human animal, dogs appear in popular fiction. And more often than not, they’re vigilantes. Rin Tin Tin, Lassie, Asta, Toto, Snoopy, Gromit, Goofy, Pluto, Scooby-Doo, Bolt… The list of such famous fictional dogs goes on and on, and for a very understandable reason: people love ’em! They can imagine their own pets standing in for these fictional fidos. Cats? Not so much.

At the risk of offending a legion of cat lovers, felines just don’t have the same heroic cache’ that comes with the tail waggers. Sorry. That’s just the way it is. If Jon Arbuckle ever fell in a well, a highly probable event, few people on Earth would believe that Garfield might go for help. Pizza? Maybe. A fireman or an EMT? Not happenin’.

That wraps up my introductory look at Villains, Virgins and Vigilantes, the power tropes of popular fiction.

Grateful and well-loved husband, happy grandparent, novelist, editor, and teacher. My life plate is full, and I couldn't be happier. Anything else I might add would be anticlimactic. Cheers!
View all posts by joshlangston →
This entry was posted in Uncategorized. Bookmark the permalink.

1 Response to Are all superheroes really vigilantes?